“Competitive games are not for me.”

“Competitive gamers tend to be jerks.”

“Competitive games take all the fun out of it.”

Have you ever heard sentiments like these?  Maybe you’ve said them yourself!  The fact is, a lot of people have had bad experiences in competitive gaming.  People have acted like jerks at tournaments.  They’ve complained, harassed, or even cheated.  I know, I’ve heard the horror stories!  And for folks who’ve had that experience, I am very sympathic.  Tabletop games should be different from those negative experiences.

That said, I just returned home from three days in lovely Roseville, MN, where I competed in the World Championship for the Star Wars Living Card Game.  And I will report that (though coming in at a meager #35) I had a great time!  And here’s what I want to report back to you: 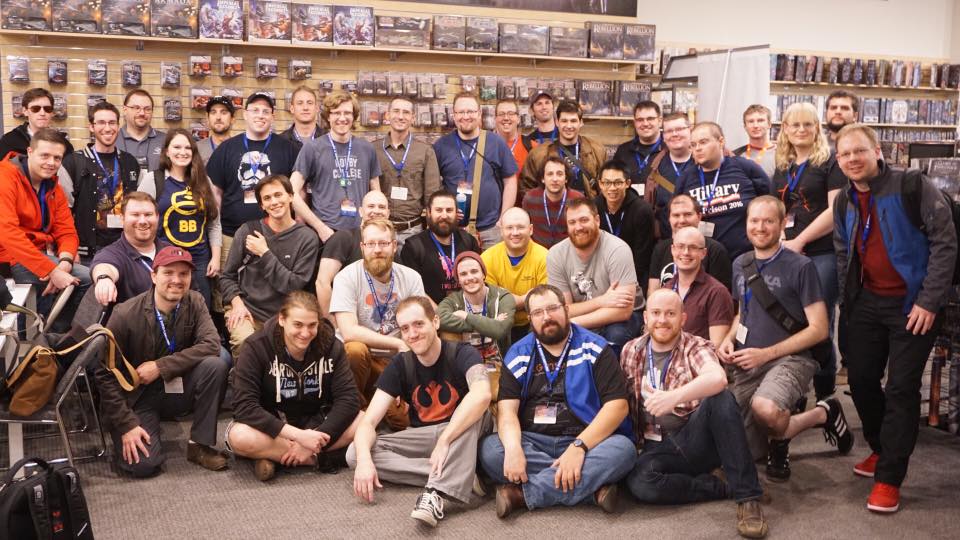 Competitive gaming, while it can have frustrating moments, can also be very fun.  Have you not played laid-back, roleplaying games that got frustrating?  Competitive play is the same way.  Sometimes thing go awry.  But often, it’s a great experience.

Here are my three take-aways from my World Championship experience that I think will encourage you to give competitive gaming another shot:

END_OF_DOCUMENT_TOKEN_TO_BE_REPLACED

Yesterday, the St. Tammany Star Wars Gamers played the 2015 Winter Tournament for the Star Wars LCG.  Listed below are the decklists along with their records.  I will be posting some statistics from those lists very soon:

Patrick won 2nd place after a one-round tiebreaker with Alex Lacour.  This accounts for the additional win and loss in each of their records.

This article continues a series for the St. Tammany Star Wars Gamers, as we continue our slow-grow Star Wars LCG League.

Well, the meta has shifted once more!  With the addition of Edge of Darkness, the Echoes of the Force cycle, and Balance of the Force, it’s practically the Wild West out there.  Here’s how I want to handle this meta shift:

The Light Side: Wookiees, Jedi Ewoks, and Sleuth Scouts

So let’s talk Wookiees.  I mean, come on.  These dudes are punishers.  Nobody was running A Wookiee’s Journey (fwiw, I’ve never used it well), but Chewbacca’s objective set was a particular thorn in the derriere.  Why?  Observe: 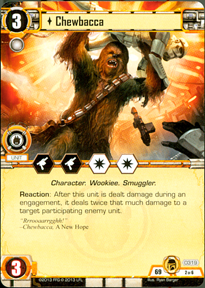 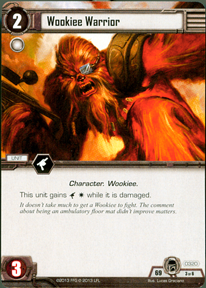 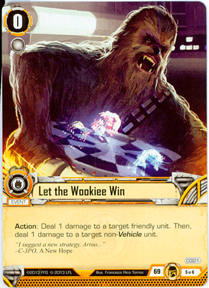 Just think on that for a few minutes.  And then remember that the objective grants Wookiees Protect Character.  And then put those furrballs in your deck!

Next, Jedi Ewoks?  Really?  We’re talking about Ties of Blood here.  I like the objective and I like Leia’s Reaction, but I struggle to justify putting her on the board.  A 3-cost, 2-health Vader magnet?  I dunno.  But that Ewok Companion with Native Support?!  Just too good to pass up. 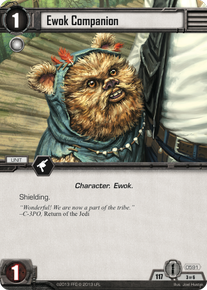 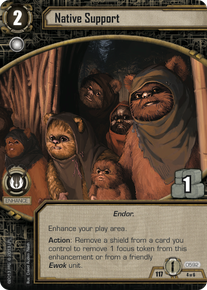 Now keep in mind that Native Support has received an errata: “Should read ‘…(Limit once per turn).'”  But still!  If you can get him in there, along with some other shielding units, like the ET-74 Communications Droid and its objective set, it’d be like having a Worlds-winning deck.   Wait a second…

Last on deck for the Light Side is the Sleuth Scouts.  I mean, seriously?  No units can defend, except those that cost 0-2?  That’s crazy!  No, what’s crazy is when you pair it with this nonsense: 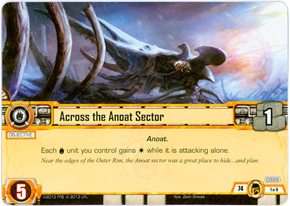 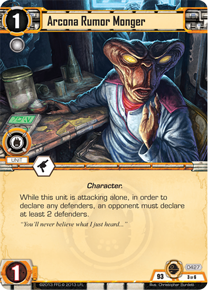 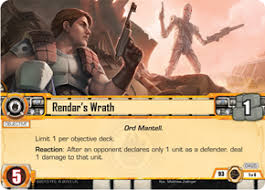 I mean, seriously.  The number of confounding options is significant.

The Dark Side: Mara Jade, Galactic Scum, and the Regulars

I didn’t notice a huge shift in our DS decks last Saturday.  Why not?  Probably because the core Sith units are still boss.  Even in the Rogue Squadron meta, they are still awesome cards.  So what regulars are still popping up?

Outside of that, we did have two notable newcomers show up on the scene: 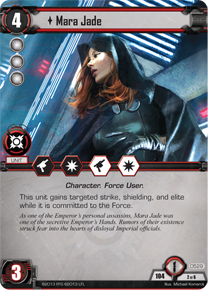 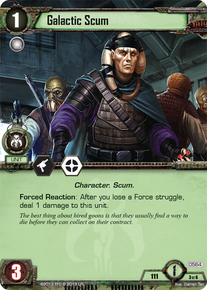 I go back and forth on Mara.  Yes, she’s awesome when committed to the Force.  But do you want her committed to the Force?  Targeted Strike only applies when attacking, so unless you have Rage in your back pocket, you’ve got a challenging decision to make.  Also, while she costs one less than Vader, she also has one less health and she lacks his awesome Reaction.  I put one copy of Mara in my deck, but you’ll have to find how she works best with your strategy.

Galactic Scum, like Hired Hands for Smugglers, is a really neat card especially for battling Sleuth Scouts.  Not to mention, its objective goes really great in capture decks.  For that matter, an edge-enabled tactics for 1-cost with three damage?  That’s like three Twi’lek Loyalists for the price of one.  For what it’s worth, this set is in almost every DS deck from Worlds 2014.

What did I run?

I’ll make this quick and to the point.  You can see the principles highlighted above in the decks below:

Jedi
1x Watchers in the Wasteland
2x May the Force Be With You
2x Wookiee Life Debt
2x Across the Anoat Sector
1x Along the Gamor Run
1x Rendar’s Wrath
1x Asteroid Sanctuary
Strategy: get all those cheap little units out there to fight the war, while Obi-Wan and Yoda keep the Force.
Unmentioned cards worth noting: Yoda, You Seek Yoda, Shistavanen Wolfman, and Executor-killing Yoda.
Sith
2x Fall of the Jedi
1x Counsel of the Sith
2x The Emperor’s Web
1x Reconnaissance Mission
2x The Executor Arrives
1x Scouring the Empire
1x Agent of the Emperor
I basically swapped out my Hoth sets with Jerec and Mara’s sets.  This may not have been the best strategy, as I got clobbered by Garrett last night.  First time I’ve ever decked out in this game.  I was going for a control deck, but I think I may need to add in some Scum to help with that.
Bring it on!
I’m going to leave my decks as is for this Saturday’s games.  So get your Sleuths, your Wookiees, your Executors, and your Scum!  Let’s do this thing!  See you on Saturday.

The Good, the Bad, and the Smuggly of SWLCG
By: Alexander Lacour

I love this game. Well, I love card games, but SWLCG brings together a lot of good things from other games that make it enjoyable. Just to name a few… The characters are awesome, artwork is phenomenal, the draw mechanic is wonderful, there are no “rare” cards, and we get to play as good AND the bad guys. Now off to the article!

I’ve chosen to write about some of my deck building experiences with the hope of passing on some wisdom I’ve learned through the past year or so to you (and so you don’t have to make the same mistakes I did).

First off, you have to decide what is your main purpose of the deck? Jason has asked me this countless times when I can’t seem to get a deck going like I want it. For the light side, do you want to win fast and go agro (rebel speeders or sleuth deck), win the force (Jedi with May the Force Be With You and Along the Gamor Run), set up slowly and win late game (trench run and DESPERATION), or a more control approach (smugglers love them some tactics)? Having this in mind when you whittle down your options to choose the right objectives to go in your deck. 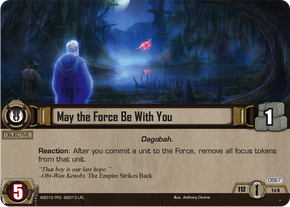 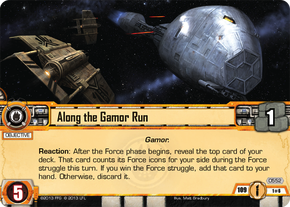 For the dark side, do you want to slow your opponent down and control what their options are (classic sith control with Vader and Palpatine), a more aggressive “I can get 4 objectives before you get 3” approach (Imperial Navy Big Boats or Fighter deck), capturing your opponents best cards (Cruel Interrogations or New Boba Fett pilot) or winning the edge (twists of fate). There are lots of options. Another great feature of the game is that all of these are viable as a tournament winning deck (except for Navy based decks – Imperial Entanglements come quickly!) 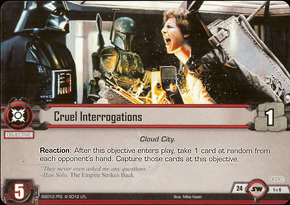 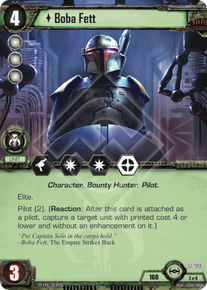 After you know what kind of deck you want to build, be VERY consistent with your deck building in the beginning. Use 2 of each objective set, no single set for now. If you do this you will be able to have a better idea of what card combos work well together since you will have your greatest chance of drawing those cards. Even if there is an objective set that you know in the end you will only want one in the deck, play with two for a couple games just to make sure you know how that card will be used. I will explain more on this later.

Trial and error really is the best way to figure out if a deck is going to work. Theorizing and deck building is fun (maybe the best part of the game), but it may not work well on the play mat. Build the deck and test it out!

Last tip for you today. When starting a deck idea from scratch, start with 2 objective sets with a card or two that uses a combo that is very intriguing. Next, find another set that will combo with those cards or a different card in the objective sets already chosen. After you put the deck together and played a few times. Switch out objective sets to fix areas of your deck that are lacking.

I’ll give you an example of one of my favorite decks to illustrate these points. I’ve basically been playing some version of this since I started.

I took this deck to my first tournament. I GOT SECOND PLACE… out of 3 people, but wasn’t satisfied with the deck as a whole. Jason asked me what my deck strategy was, and I couldn’t really answer him. The objective sets seemed like no brainers to me at the time. There was some good synergy. There are some 2 cost vehicles for Attack Pattern Delta, edge 1 for speeders, and Mobilize the Squadrons has a card that puts shields on your guys. That last bit goes well with Preparation for Battle. However, the deck was still a bit slow and my vehicles died quickly since they are low cost. The deck needed a revamp. I decided to go simple. I decided to go with the strategy of flooding the field with cheap vehicles and go from there. I chose objective sets that had at least 2 two cost vehicles in the set except for one.

My thinking here was that I now have 20 vehicles out 50 cards that are 2-cost. There is the obvious speeder synergy. I put y-wings with protect vehicle so that my little ships can survive for a longer period of time. Rogue Squadron Assault has Hobbie as a pilot and the objective set works well with the y-wings. The set also has the new fate card “stay on target” that lets me put pilots into play for cheaper, so Wedge gets to benefit from that card. After play testing for a while, I still wasn’t happy. I wasn’t winning the edge as often as I like and the speeder tanks in Prepare for Battle were not as important to the overall strategy of the deck. Also, having 2 Prepare for Evacuation was overkill. There isn’t much in that set other than the y-wings and the fate card that I like. Let’s try it again!

So many problems were solved with this list. There is a CLEAR strategy – swarm the field and win the edge. Draw Their Fire has 2 two cost vehicles and Ackbar who is a game changer when he enters an engagement from your hand. Blue Squadron Support has 2 two cost vehicles who are very strong. Plus, these new objectives can benefit from Rogue Squadron Assault’s ability.

I hope this read helped you guys somewhat. Don’t give up an idea too soon. Play test when you can and find that list you are happy with before moving on to the next great idea. Or you can forget everything I said and copy a list online from a tournament winner.

See you next Saturday at Big Easy Comics!