If you’re new to my project, Chasing the Dragon, you may want to read an introduction here.

I need your input on my first house rule.

Now this may surprise you, as I’ve never even played a session of AD&D yet.  Not as a GM.  Not as a player.  Never.

So please answer my question, oh experienced grognards of the first edition!

Is the following rule going to work well, while keeping the spirit of the game in tact?

So here we go.

The reasoning for the rule

Well, the reason is simple.  The initiative rules don’t make any freaking sense.  They seem to at first–“Roll a d6 for each party at the beginning of each round?  No problem!”  But it’s not that simple.  Ooooh, no.  You see, that doesn’t really apply to magic-users.  And then characters with multiple attacks are all screwy.  Beyond that, you can see a list of all the complications here.

In the end, OSRIC (a reprinting and streamlining of the AD&D rules) basically made up their own initiative system that (1) seems loosely based on how initiative works for magic-users and (2) ignores weapon speed altogether.  If OSRIC thinks there’s a problem with the initiative system, there’s probably a problem.

What is weapon speed, the uninitiated ask?  Basically, it’s a rating given to weapons to tell how quickly a person is able to strike with it.  There’s no precise timing given to each rating, but a fist (1) is faster than a dagger (2) is faster than a broadsword (5).  The way the weapon speed is applied relates to initiative, but is generally convoluted and too confusing for anyone to actually use on the fly.

In the end, OSRIC’s rule is not bad.  I just don’t like that weapon speed is taken completely out of the picture.  Nevertheless, I don’t want the process to be as complicated as the DMG makes it.  So here’s my attempt at a solution… 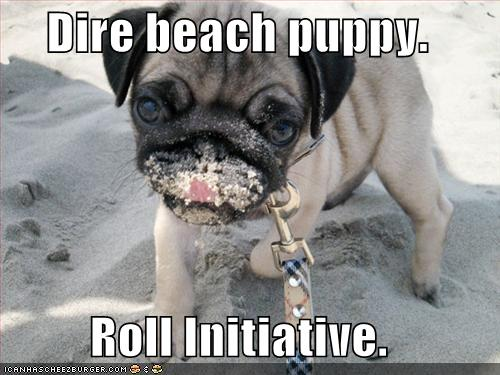 The rule – examples will be typed in blue

I need your input

I think this will not only clarify the rules in a way that retains weapon speed, I think it will play smoothly.  Not to mention, it may give early level magic users a little bit of protection by delaying some of those weapons.

Regardless, what do I know?  I’ve never played before!  I need your help, so please RT and pass this around.  I want as much feedback as I can get.  Tweet me at @wood_jasond or sound off in the comments below!