This post will likely be the first of a few post-mortem reflections on T1: The Village of Hommlet, as my local gaming group just completed our tenth and final session in this classic Gygax module.

As this is my first AD&D adventure, I’m struck by a number of things: 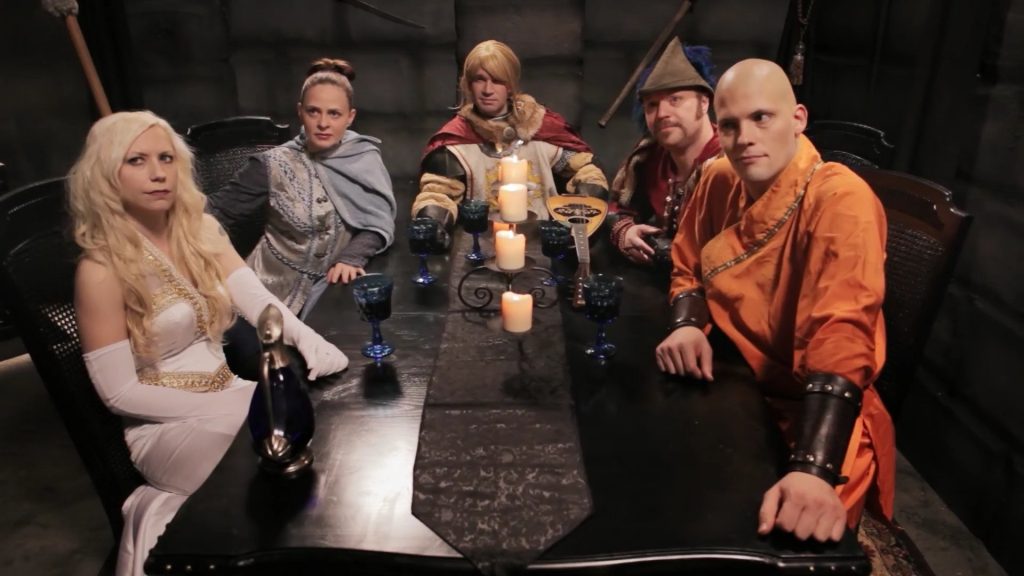 And to think, I would’ve known this already if I’d thought back to that modern classic gaming film, The Gamers 2: Dorkness Rising.  Haven’t seen it?  Read on…

Dorkness Rising is actually how my first GM introduced me to roleplaying.  We’d played our first session and then we sat down for a little YouTube movie action.  The movie basically follows a group of gamers as they are playing a Pathfinder campaign.  The movie cuts back and forth between the gamers and the characters they portray, showing (in remarkably accurate detail) how real life intersects with the gaming world.  Seriously, check out not only this movie, but all their work over at Dead Gentlemen Productions.

Anyway, the movie begins with the player characters getting to a portion in the adventure where the last PCs died.  There was a total party kill, leading to the players to roll up new characters and go at it again.  As a first time gamer, I found that odd.

Why would the players want to go back through the same adventure?  What benefit could it really grant them?  And isn’t that basically cheating, if you know what’s coming next.

After playing Hommlet, I now understand.

[Spoilers below, if you haven’t read/played the module]

Brutal “no save” effects

For those unacquainted with AD&D, some attacks require players to roll a saving throw to see how the attack affects them.  The Giant Spider on the ground floor of the moathouse is a classic example.  If it attacks successfully (which it does easily), the player must roll a saving throw vs. poison.  Basically, you need to roll anywhere from an 11-13 or higher on your d20.

What happens if you fail?  You die.

First is a spell that can be cast by Lareth the Beautiful (who is admittedly the final boss).  It’s Cause Blindness.  It takes half a turn for Lareth to cast the spell, which you would think makes it easy to interrupt.  Except he’s basically impossible to hit (thus interrupting the spell).  Once he has completed the spell, he touches a player character who is then immediately and permanently blinded.  Man.  It’s rough.

Second, is a tunnel leading off from the crypt of the ghouls.  There is a trail of gold leading away down the tunnel.  If your players go further than 30′ along that path of gold, they are simply lost…forever.  There’s no finding your way back–no passing Go–no collecting $200.  You’re just freaking screwed.  And lost.  Forever.

Looking for the fun factor

Is that fun?  Well, it can be, in this sense.  When a threat is that lethal and your character’s life is balancing on the edge of the knife, it certainly amps up the danger factor.  But when it happens over and over again…it just gets kind of frustrating.

Add to that frustration the reason that I strayed from d20 systems for quite some time: binary dice results.  You succeed or you fail, depending on the number that you roll.  Now you could argue that it’s at the GM’s discretion how that works.  You could take the precedent of a game like the Mouse Guard or Star Wars RPGs and spin a failure to have positive effects.

But let’s be honest: if you’re swinging a sword at a dude wearing plate armor and fail by a margin of 9…how can you possibly spin that?  It could be done, but perhaps at a violation of the rules system and the tone of the game.

I’m not saying the game wasn’t fun.  But I could certainly sense frustration from the players, who are (again) very seasoned, thoughtful, mature gamers.  It became fairly common at the table for people to make comments like, “Man, Gary Gygax is a [insert derogatory word here]!”

When the metagame takes over

The ghouls were the first serious setback that our team confronted.  If they attacked you successfully and you failed your saving throw, you were paralyzed…for a long time.  The PCs escaped by the skin of their teeth!  But you know what they did when they came back?  They came back with lots of holy water.  They’d cracked the code!  They knew what was coming, did a little metagaming, and then slaughtered them.

When it came to the final battle with Lareth, it was a freaking bloodbath…and not in a good way.  All of our characters were grappled, blind and/or paralyzed, or dead by the conclusion of that battle.  The living characters dragged off the paralyzed ones, fleeing from Lareth’s wrath.  But what happened next?

Enter one potion of diminution and one potion of polymorph (self).  The party invited their closest treant friends from the forest to quaff these potions and then beat the ever-living hell out of Lareth.  That poor sucker lasted one and a half rounds.  Again, they cracked the code.

Now, the treants aren’t native to the module.  They were a random encounter that went very, very well.  But still, I don’t see how a party could actually beat Lareth in one attempt.  You basically have to get party wiped, roll new characters, and go back again.  It ends up being about the metagame.

It’s my understanding that these experiences are more descriptive of Gygax’s writing than of AD&D in general.  I look forward to delving into U1: The Sinister Secret of Saltmarsh very soon so that we can compare.

For those who are more experienced with AD&D, would you say this is representative of AD&D?  Simply Gygax?  Maybe it’s just early modules?  And how have you mitigated the aspects that might interrupt the fun and promote meta-gaming?  I’m all ears!

20 thoughts on “How to beat Gary Gygax”