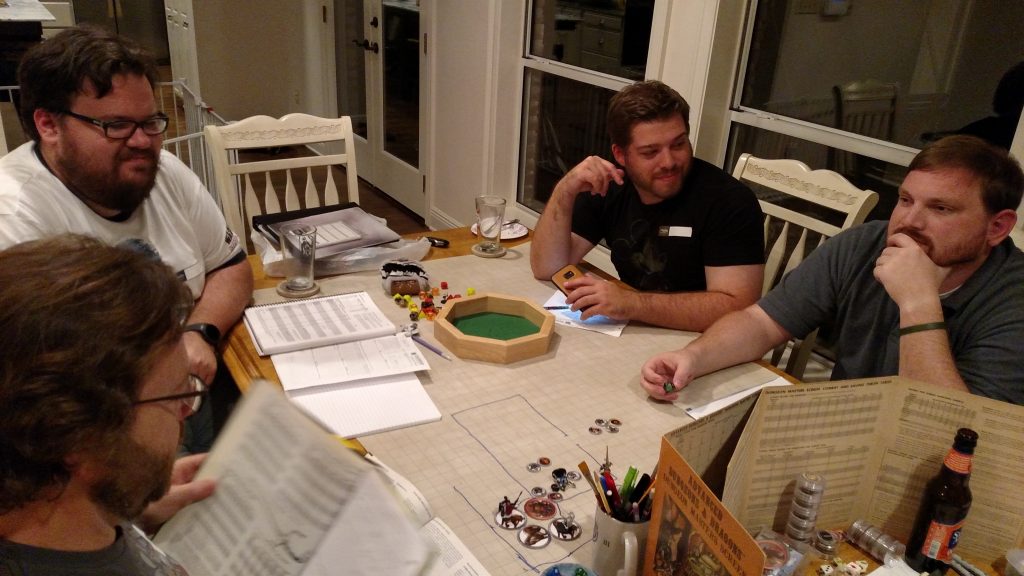 Danger is important for tabletop RPGs

In any story, there must be danger involved.  In an action flick, that danger is often life-and-death.  But a romantic comedy is different.  In a RomCom, the protagonist’s happiness or love life is endangered.  Likewise, in many dramas, the danger is not about physical death, but the death of one’s dream, one’s integrity, or one’s future.  Danger doesn’t have to mean imminent death.

However, there are some game systems that prefer imminent death as a danger.  Advanced Dungeons & Dragons is simply one of those systems, as I’m learning.  Even 4th Edition D&D, while it was harder to die–it was a definite possibility.  Several times as a GM, player death snuck up on me like it has in AD&D.  When the players regularly walk around with swords and flails, there’s a good chance somebody might die.  But that doesn’t apply to every system!  FFG’s Star Wars RPG really protects player characters from death.  It is really, really hard to die in that system, unless you’re taking some really crazy risks!  So some systems will be predisposed toward or away from PC death.

If the RPG you’re playing does have the strong possibility for PC death, GMs need to be able to embrace that.  What would happen if you tried to avoid it?  If death is not “on the table,” you can lose any sense of risk and players will either (a) take advantage of that fact or (b) not enjoy the process.  Without danger, you don’t have a compelling story.  And for many game systems, player death must be a possibility…or even a probability.

Just because your PCs may possibly (or even probably) die, it doesn’t mean you can’t help them avoid death.  Ask helpful leading questions, like “are you sure you want to split the party” or “have you shopped around for potions yet”?  If your players don’t like helpful tips, fair enough.  But if you see them walking into a gun-fight with only a knife, you might want to give them a tip.

Also, it seems that players have forgotten that they can run away from battle.  Maybe MMOs have goofed up our thinking on this, but the heroes can always retreat when overwhelmed.  If you see your characters getting whooped, suggest a retreat.  They may ignore you, but there’s no harm in trying.

At the end of the day, we want to cultivate a sense that the GM and the players are working together to craft an enjoyable story.  Yes, GMs dole out the killing blow at times.  But that’s not our highest goal.  So help out your players if you feel they’re unnecessarily or ignorantly walking into a bloodbath.

Dealing with danger is the prerogative of the players

Ultimately, regardless of the system or situation, the players have freedom of choice over their PCs.  You may warn the players–you may give them tips, but ultimately they make the choice to charge into battle.  If you have done your level best to prepare the players, then you can’t feel bad about what happens on the battlefield.  Why?  Because your job is to create danger, to play NPCs appropriately to their character, and to challenge the players.  It is the job of the player to respond, to act, and to overcome.

As GMs, we must give players control of their character’s destiny.  And that means not pulling our punches.  Help them, yes.  Give them opportunity for success, yes.  But if we’re afraid to close the deal on danger–even if that means PC death–then our gaming will not be as fun.  It will lack a real sense of danger or risk.  But if GMs feel free to do their work, it will ramp up the intensity of the danger, as well as the intensity of the players’ victories.

Danger that is meaningful to the PCs

Ultimately, what we must do is create danger that will be meaningful to the PCs.  What loss will motivate them to action?  What challenge will cause them to tremble with excitement and fear?  What barrier will spur them on to fight and to overcome?  Only you and your players can answer that.  But if death does not motivate–if it doesn’t make it feel more risky and fun for your players, try something else.  Ultimately, PC death will almost always be a possibility–and one that (if not occasionally experienced) might leave your game lacking a sense of uncertainty and risk that really improves our gaming.

So what will you do in your game this week to ramp up the intensity of the danger and of the players’ victory?  What will stand in the path to challenge them and to inspire them to succeed?  It may be character death.  It may be something else.  But whatever your choice, embrace it and go all out!  Don’t pull your punches.  Have a good time, fight, and I’m convinced your players will too.

Sound off on our Facebook page.  How does your gaming group deal with PC death?  When was the last time your group experienced it?

3 thoughts on “Should player character death be a possibility?”