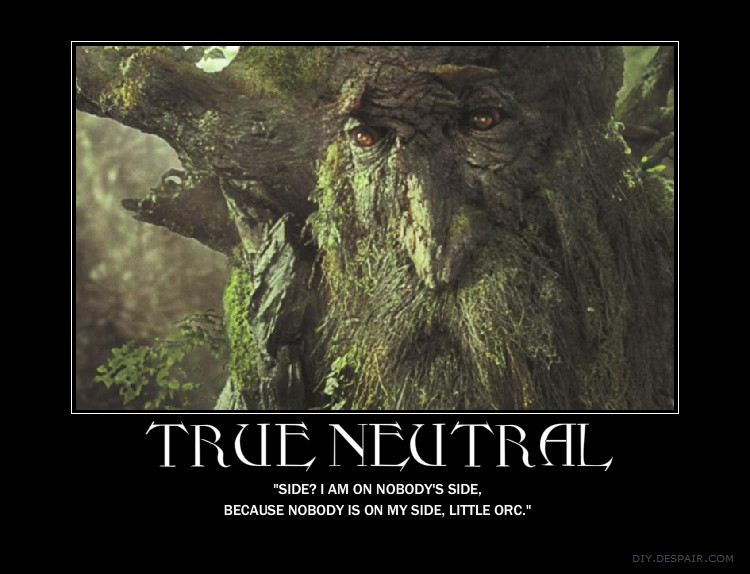 Alignment began as an essential part of character creation

While 4e dismisses alignments as the personal choice of a few, this was not the case in earlier editions.  OD&D contained alignments in an early protoplasmic form called “stances” that reflected Law, Chaos, and Neutrality.  D&D Basic added the language of “alignments,” the Good-to-Evil spectrum, and this note:

“If the Dungeon Master feels that a character has begun to behave in a manner inconsistent with his declared alignment he may rule that he or she has changed alignment and penalize the character with a loss of experience points.  An example…would be a ‘good’ character who kills or tortures a prisoner” (Holmes, pg. 8).

Now alignment has some teeth.  But D&D Basic doesn’t really justify penalizing players for violating their alignment.  Why does it matter?  What is unclear in Basic becomes crystal clear in AD&D: alignments are meant to give characters meaningful depth, both in terms of their ethics and their personality.

“…alignment describes the world view of creatures and helps to define what their actions, reactions, and purposes will be.  It likewise…aids players in the definition and role approach of their respective game personae” (pg. 23).

Alignment restricts players to help them

Does alignment restrict players?  Yes.  Most certainly.  That’s the intention!  But why?  It’s because restriction forces people to make hard choices.  And one of the great thrills of roleplaying is facing difficult challenges and making hard choices.

Let’s look at it from the other end of the spectrum.  In the last 4e campaign I played in (last year), our party of three players had, by the end of the campaign, devolved into the most heinously inhuman murder squad I’ve ever witnessed.  Enemies, NPCs, buildings–didn’t matter.  If we didn’t trust it, it died.  And I can promise you this: none of us had a clue what our alignment was.  It didn’t matter, because there were no clear ramifications for acting outside of alignment.

Now, let’s fast forward to 2017: AD&D.  So our party of six is in the village of Orlane, investigating a case of a missing person.  While we do have an evil character in the party, we also have three rangers, which means three good-aligned characters.  The PCs are so close to the truth behind the façade, it’s starting to drive them nutty.  So in a moment of passion, one of our rangers notched an arrow to take out a prisoner.  Enter, me, the GM:

“As a player, you’re welcome to do what you want.  But remember that this will threaten not only your status as a ‘good’ character, but also as a ‘ranger.’  Consider carefully what your character would do.”

It might seem like a jerky thing for me to do.  I mean, isn’t roleplaying all about freedom of choice?  Not according to the July 1981 issue of Dragon Magazine.  In it Roger Moore reflects on the difficulty of playing a paladin.  Not only did the necessary restrictions on the class “give it a wealth of special problems in play,” but it was a class that he rarely saw “done at least reasonably right most of the time.”  In the end, he called it “the hardest [class] to play.”  So why bother?

It’s easy to play a morally gray, ethically amorphous character.  It’s harder to play a consistently characterized and thought-out player.  That’s what Gygax was trying to achieve here.  He was encouraging players to adopt a real persona–a real person.  And then to struggle within that persona.  And in my mind, that really enriches not only the character, but the overall gameplay.

Don’t forget that you probably have an alignment too!

How many times have you had to make hard decisions that stretched or challenged your beliefs?  Whether you consider yourself particularly spiritual or philosophical, we all have a worldview.  We all have some kind of answer to what gives life purpose and meaning.  It’s in the defining moments of life that we really have to stop and consider, “Wait.  Can I justify this course of action?  Or do I need to stop?”  It’s these internal battles that shape our character most.  Consider that, as you consider whether you want to introduce alignments more seriously into your roleplaying.  How have these issues shaped you personally?  And how could it shape your character and your adventuring group?

More poignantly, and perhaps more subversively, consider what it would be like to play a character whose alignment is quite unlike your own.  What would it be like to consider that worldview more deeply–to challenge it–to test it–and even to try it out?  Even if that’s a little too weird for you, I’ll get down to brass tacks.  Here’s my challenge:

For the next four RPG sessions, encourage your group to adopt a hard stance on alignments.  See how that would impact your sessions, your characters, and your overall gameplay.  You may learn to love this old/new way of gaming.  Or, if you don’t like it, house rule it or simply leave it behind.  It won’t hurt my feelings!  But in the end, I’ve found it to be an enriching part of AD&D and one that you should try as well.

7 thoughts on “Should you reconsider D&D alignments?”