So we all know who Gary Gygax was.  We know that he wrote the core rulebooks for 1e AD&D.  But what about the modules?  After all, that’s the goal of my project: to play through all of Gygax’s AD&D modules!  So which ones would that be?  Let’s review all seventeen of them in chronological order according to their publication:

1978 was a prolific year for Gygax.  The AD&D Monster Manual had been published in December 1977 with the Players Handbook to follow in June 1978.  So in 1978, Gygax released seven modules in conjuntion with the release of the game:

G1: Steading of the Hill Giant Chief
G2: The Glacial Rift of the Frost Giant Jarl
G3: Hall of the Fire

This series was released at Origins ’78, each module intended for “tournament play.”  The adventure was run for players at the convention and then it was released for sale.  Intended for characters levels 8-12, these modules were no walk in the park.

D1: Descent into the Depths of the Earth
D2: Shrine of the Kuo-Toa
D3: Vault of the Drow

This series was released at GenCon XI, again for “tournament play,” which again means most parties died.  Players needed characters between levels 9-14 to endure this difficult road.  These modules introduce the drow to the D&D universe.

That’s right!  The infamous TPKing slaughterhouse was released in AD&D’s first year of existence.  Gygax had actually been using an unpublished version of it for a few years to test players’ skill and acumen.  Many self-professed heroes perished in the halls of that tomb.  It was a bloodbath.

1979 saw less modules coming from the pen of Gygax.  In the Introduction to the AD&D Players Handbook (also released in 1979), Gygax states that the Players Handbook and Dungeon Masters Guide were compositions that caused “no small amount of trepidation” (pg. 5).  It is my assumption that his time was too consumed with these two works to be able to write many modules.  As a result, we only got one new AD&D adventure from the pen of Gygax in this year.  But it’s a classic!

T1: The Village of Hommlet

I’ve already written briefly about this classic module.  A very sandboxy village + dungeon setup that force the DM to come up with a storyline.  As it happens, it’s Gygax’s only introductory AD&D module.  I’ll leave it at that, since you’ll be hearing more about this one at length later on.   I’m currently running a group through it.

1980 continued the low output from Gygax with only one AD&D module.  The reason for the low production, though, was that he was in Los Angeles working on the D&D cartoon.

S3: Expedition to the Barrier Peaks

This began as a D&D tournament campaign in the mid-seventies that went through several developments over the years.  In the end, it’s Gygax’s first introduction of science fiction into AD&D.  Yes, that’s right, there’s a ray gun on the cover.  Enjoy fighting that thing off with a sword! 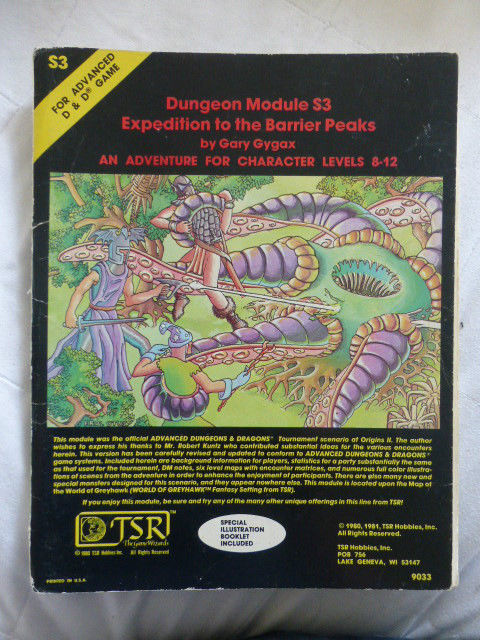 In ’82, we get two more modules from him, even though Gygax was juggling a number of other complications and responsibilities at TSR:

S4: The Lost Caverns of Tsojcanth

Another mid-seventies convention module that Gygax later updated, this is a game in the vein of Tomb of Horrors.  It’s really tough, from what I understand.  But there’s something more interesting about it, but it’s helpful to first be familiar with its sequel, WG4: The Forgotten Temple of Tharizdun, also released in ’82…

WG4: The Forgotten Temple of Tharizdun

Gygax’s own words confirm that WG4 was intended to be a fourth module in a series of T1 (1979), T2-4 (1985), S4, and WG4.  These four modules, then, would make up the World of Greyhawk series.  Unfortunately, T2-4 got caught up in production delays and it never came to be presented as such.  Also, there are plot lines that were never really connected, though some resources can help with that issue if you wanted to play these campaigns in such an interconnected fashion.

Gygax continued to develop the World of Greyhawk, but only by extension through the exploration of demi-planes reached through Castle Greyhawk:

EX2: The Land Beyond the Magic Mirror

Each of these modules explores a different demi-plane.  The first explores settings from Lewis Carroll’s first Alice’s Wonderland book, while the second explores Carroll’s second book in that world.  Unfortunately, Gygax was never able to release the module that explained Castle Greyhawk in-depth.  So we only get these demi-planes branching off of it.

As TSR was continuing to struggle internally and financially, Gygax came back with a tour de force of publication with Unearthed Arcana, Oriental Adventurers, a Greyhawk novel, and these four modules:

It was six years in the coming, but finally T1: The Village of Hommlet got its long-awaited sequel in T2-4.  How did it finally come about?  Gygax gave a couple hundred pages of notes to Frank Mentzer to distill.  So you do get original Gygax work, just heavily organized and distilled by an editor.  Unfortunately, many found T2-4 to be too different from what they expected as a followup to T1.

WG6: Isle of the Ape

And as Gygax’s final AD&D module (not to mention his final TSR module at all), we get another demi-plane extending from Castle Greyhawk.  Leaving Alice’s Wonderland behind, this module explores an island eerily reminiscent of King Kong’s home.  It’s functionally an outdoor dungeon crawl, which had not been done previously.  And it’s designed for character levels 18+ to boot.  Why is this not in the Extension-series with EX1 and EX2?  Your guess is as good as mine.

Released only months after T1 – The Village of Hommlet, this D&D Basic module followed a similar setup with a village and a dungeon.  However, it was neither as sandboxy, nor as village-focused as Hommlet.  I’ve been told this can be easily converted over to AD&D.

The conclusion to the GDQ series was actually not written by Gygax, but by David Sutherland.  The ideas were originally culled from Gygax, but this was a Gygax-less composition.  In the end, he got a credit for the original ideas.

This is the grisly megadungeon to beat all megadungeons.  It was actually developed by Rob Kuntz during the early 1970s with Gygax as a player.  When Gygax was trying to develop the World of Greyhawk, he brought Kuntz and others in to help with the process.  Gygax’s only contributions related to his PCs, now being used as NPCs.