Second but more primarily, we disbanded the group because online GMing was beginning to wear on me.  While online GMing has its pros, it also has its cons.  I’m not referring to limitations that can be overcome or the simple temptations that come with the territory.  I’m talking about unavoidable characteristics of online GMing from which I needed a break.  I could handle it for two and a half years, but then I needed a hiatus for these reasons.  I needed to bring my game back home. 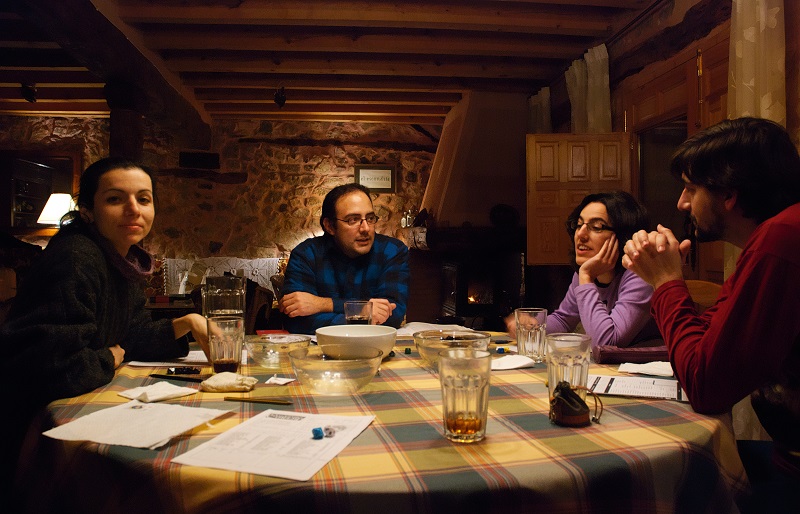 Using a machine to communicate always lessens the communicative experience.  That’s why you’d rather visit your close friends than only talk to them on the phone.  This doesn’t mean that communication technologies are wrong or unhelpful.  They’re simply less than ideal.  But what is the ideal gaming group?

My ideal gaming group is a group of my friends.  These are people that I want to eat with — hang out with — and generally get to know better.  That’s not to say you can’t get to know people online!  It’s just a different kind of relationship — one in which there is a necessary distance.  In the end, I wanted to get back to a home game, where I could get to know the folks in my own backyard.

There’s something to be said for tactility in gaming, that is the ability to perceive and communicate through touch.  Whether patting another player on the back, a high five, or a handshake, each tactile interaction enhances gaming.  When my home group of adventurers met a Commander from the Rebel Alliance, he shook their hands.  And as he did so, I shook their hands.  It wasn’t a strange forced moment, it was immersion at its best, as each player embodied their characters.  The looks on their faces as we shook hands communicated their motivations and interest in the Commander.  It was a neat moment.

Another tactile part of gaming is dice rolling.  I’ve never been a big fan of digital dice rollers.  Maybe it’s superstition… I don’t know.  But when I roll physical dice, there’s no randomizing program that I can blame.  It’s either the way I rolled it, fate, or complete randomness.  And I enjoy that tactile part of gaming.  When I GM online, not only do many people use dice rollers, but you also can’t participate in their dice rolling.  Last week, as we played AD&D, I chuckled when I realized that often when the dice were rolled, players jump to their feet to see the results.  The whole room responds with cheers, laughter, or groans.  I simply haven’t experienced this benefit of tactility while GMing online.

As any marriage counselor will tell you, it’s important to be able to fight well.  When players have disagreements with one another or with the GM, you need to be able to mediate that conflict productively.  For example, one should never, ever, ever fight by text or email.  That’s a guaranteed method for poor communication and hurt feelings.

In the same way, I’ve found it hard for players and GMs to fight fairly online.  I’m not sure what it is about the medium, but it tends to go poorly.  People close windows or slam computers shut.  Or they make critical comments that they wouldn’t face-to-face. I guess what I mean is that it’s easier to take your ball and go home, when all that entails is turning off the machine.  When you’re actually present with someone, it’s not so easy to get away from the fight.  You have to do things like talk, argue, and compromise.  Reconciliation — fighting well — makes a game group better, but it’s hard work.  And if we want our groups to last, we need to be able to fight well.  And I’ve simply found that hard to do online.

Con #4: The Pressure of Nostalgia

As many of you know, I’m a relative newcomer to tabletop gaming (summer 2011).  But I still have a sense of nostalgia, thinking back to my first game sitting around the dining room table with a couple of friends, eating snacks, and slaying goblins.  I’ll treasure those memories for a very long time.  There’s something to be said for nostalgia.  Enjoying a flashback to an earlier time by repeating it around a non-virtual tabletop.  Maybe this was the real reason our online group disbanded.  Maybe I just wanted to get back to the simple, pure beginnings of my roleplaying hobby.  Of course, I’m playing AD&D 1e now…so there’s your sign!

Now will I GM online again?  Most assuredly.  In fact, I’m GMing a game online tonight!  It’s a really fun way to game, given all the pros that it does have going for it.  It’s fun to play with friends no matter the type of tabletop.  But sometimes, you’ve got to take a break and bring it all back home.  Don’t forget that GMs are supposed to have fun, too.  Get online — or just head back home — and have some fun!

9 thoughts on “Should you game online or in person?”