This week, the St. Tammany Star Wars Gamers began our first Star Wars LCG league.  Since this post is primarily intended for that group, I don’t plan to go into detail on the LCG model or this particular LCG.  There are other wonderful resources that can help you with that.

When Alex Lacour and I were driving back from the Houston Regionals for the Star Wars LCG, we made a decision.  We had to get a league going.  Why?  Because we were completely ignorant about the then-current meta.  With only two of us playing, we were constantly responding to one another’s deckbuilds with no real idea what was happening elsewhere.  So our league has officially begun!

With this series of posts (some hopefully also written by Alex), we want to talk about our current meta at Big Easy Comics and how to strategize in that environment.

Since we are doing a slow-grow league format, right now the only legal objective sets are those from the Core Set and the Hoth Cycle.  We saw lots of speeders and lots of big Sith dudes.  Since I went undefeated today, I thought I would post my deckbuilds and talk about the strategy behind them.  I will leave my decks the same for next Saturday’s gameday.  Feel free to copy my decks or to build your decks to undo mine.  No sweat.  We’re all learning at this point.

My Light Side Deck
Strategy 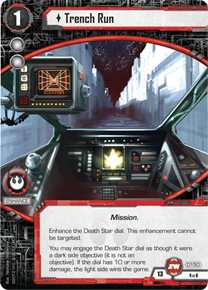 My strategy is wholly stolen from the gentleman named Gerhard Hallgren, who won 1st place at the Houston Regionals and 10th at Nationals.  Get lots of speeders on the board, along with Trench Run.  Don’t attack until you can take out the Death Star in one fell swoop.  If Trench Run just isn’t available, follow the same strategy, but destroy 3 objectives in one turn.  Takes a lot of patience, but it seems pretty effective

I included this set, thinking that the objective action would be helpful.  In
reality, I never used it.  However, I played every other card in the set.  Not   gamechangers, but helpful.  This set might be well-replaced by 2 copies of
Ackbar’s set, Draw Their Fire.

Until today, I never realized how awesome this set can be.  Yes, it has Trench Run, which is insanely good.  And who doesn’t like a 1-cost/2-damage X-Wing and a Rebel Assault?  But look at this card: Covering Fire.  I sacrificed Rookie Pilot and shielded seven attacking speeders in my Death Star run against Patrick.  It’s just stupid how useful that was.

Now we’re getting into our speeders.  The objective is just insane. Edge(1) for every participating speeder?  Yes, thank you.  Now, keep in mind that only works if you have more Hoth objectives than your opponent!  I used Wedge to make a ship functionally Elite in one game; in another, to attack twice.

I put this in for a copy of Preparation for Battle right before we started.  Why?  I didn’t need four speeder tanks.  And those Y-Wings with Protect Vehicle are pretty boss.  Stick those suckers on a force card, let them sit, and soak up damage.  Sure there’s a risk of not having any Smugglers resources out there, but in the grand scheme of things that’s only two units I can’t use.  Plus, there’s a Battle of Hoth fate card in there.

Did somebody say free freaking speeders?  Yes…yes they did.  Plus a Battle of Hoth fate card?  I mean, come on.

My Dark Side Deck
Strategy

This is a pretty standard Sith approach.  Get the Force, get your bigs on the table, and defend.  Attack only if you’re feeling lucky.  Vader + Sith events = dead units.  Palp on the Force = Balance.  Executor = insurance. 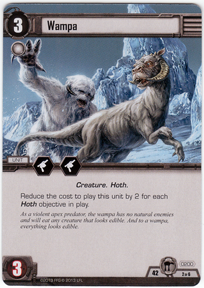 Most of you know the reasoning behind most of these, I think.  But here are few points that stood out to me today:

I thought we had a great first outing today.  I hope each of you enjoyed it!  As our meta progresses, I look forward to learning along with you how to enjoy this game more and more.

I know several folks had prior engagements for next week, but we’ll still be there hopefully taking down my speeders.  Good luck and may the force be with you!

One thought on “(Re)Creating the Meta: Star Wars LCG Pt. 1”