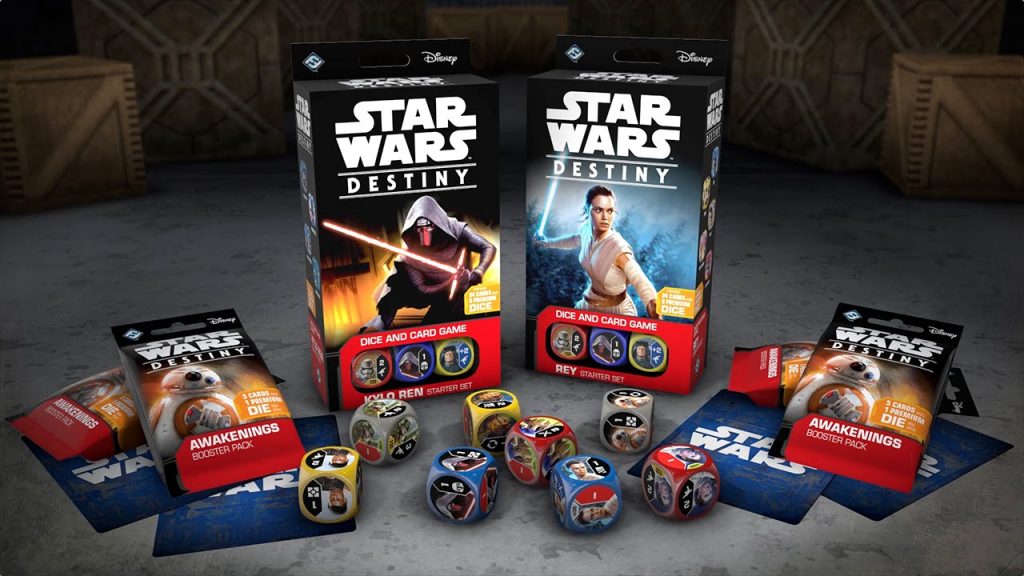 I don’t want to walk this road, when it’s been done better than me.  But I know people are asking the question.  I’m an avid fan of the Star Wars LCG podcast called The Combat Guild.  They had an excellent response to a listener question about this very topic, so I’ve included their thoughts from Episode 57 here for those interested:

Star Wars Destiny (once you get the hang of it) is a fast-paced, back-and-forth game, where you are constantly making plans, adjusting them, abandoning them, and executing them based upon the other player’s actions.  The basic gameplay revolves around three basic mechanics: playing cards, using card actions, and rolling dice.  I find that the game runs smoothly and quickly, once you’ve got a basic knowledge of your deck.

Unlike the Star Wars LCG, you aren’t spinning a bunch of plates at once.  The objective is clear-cut and simple: kill your opponent’s characters.  While there are plenty of card synergies, at the end of the day, you’re just trying to kill those 1-3 characters.

As a result of its simplicity, I’m find that Destiny is an easy game to get casual players into.  For example, my wife plays it with me.  And she’s not a gamer by any stretch of the imagination.  So, already, that’s a huge plus for me.  And I’ve heard many others say the same thing about non-gaming significant others.  It’s simple enough for casual players, but complex enough for hard-core competitive types.

Another thing that I’m enjoying is the expansion from the Original Trilogy setting in which the LCG is situated.  I’ve been playing a deck built around Count Dooku and two First Order Stormtroopers.  Anachronistic?  Yes.  Fun?  Also yes.  This game is not concerned with those sort of details (again, the LCG is).  And that’s OK.

Also, a game only takes 20-30 minutes once you get the hang of it.  That means you can crank out several games in a short period or so and get your gaming fix.  Plus, your brain will not feel like mush when you’re done.  It’s simple, sweet, and to-the-point.  It’s a good game.

Seriously, as an AD&D devotee, I love that saving throws are so intense and final.  “Save or die” is the most adrenaline-inducing, gut-wrenching phrase I’ve ever heard.  But I’m not so sure I like dice up in my card game’s business!

I played X-Wing Miniatures every week for about a year and a half.  I liked the game.  But those damn dice!  What I learned was that the game was won or lost (in a casual to moderately competitive setting) through dice manipulation.  If you could control what happened to them, rather than rolling them, you had a significant advantage.  Star Wars Destiny is the same.

For those who have not played, your characters and certain support cards (like Rey’s Staff, Lightsaber, or First Order TIE Fighter) have dice associated with them.  When you activate your card, say Rey with her Staff, you roll two dice–one for Rey and one for the staff.  The results of your roll tell what kinds of damage or actions are completed by your character and her support.  She may do 3 melee damage!  She may gain you a resource or a shield.  She may get a blank.

Granted, there are lots of opportunities for re-rolls.  But dice manipulation is where it’s at.  The dice are not bad.  But they’re not my favorite thing either.  I fear that I may get frustrated with them in time.  But then I may just lean toward decks that manipulate dice directly.

I really hope that any critical feedback will be taken with as humble a spirit as possible.  I truly enjoy the good folk at Fantasy Flight Games–they treated us well at Worlds last year–they’re kind, creative, and great folks.  But here’s what I don’t like about Destiny:

First, the CCG format is a pain.  What first drew me to the LCG (besides the Star Wars theme) was that I didn’t have to screw around with booster packs and hunting down cards.  I just got the cards, focused on deckbuilding, and played the game.  If I were to do that for Destiny, I’d have to pay several hundred dollars to Team Covenant or to somebody on eBay.  And I’m just not doing that.

As a result, I expect that I will always be a relatively casual player of Destiny.  I’ll buy enough packs to get all the Commons and Uncommons.  I’ll probably sell a lot of my Rares and Legendaries.  I’ll keep enough to play with my wife and my friends and be happy with that.  In the end, I almost wonder if the CCG format is really better for people in a different life phase than myself.  The Star Wars LCG is played almost predominantly in our area by folks who have little kids at home, very busy work lives, and a tight budget.  The LCG fits into that world very easily.  The CCG does not seem to.  This is one reason that I hope the LCG stays very much alive.

Second, and this is more a criticism toward FFG’s approach to this game, I really wish that FFG would communicate with the player base of the LCG.  I understand that gamers are sensitive, when their games feel threatened.  I understand they may not be understanding or forgiving at times.  But if FFG would merely look on their own forums, they’d see players screaming that the sky is falling because of the Destiny release.  It would be a comfort and a boon to business, if they’d just say, “No, we’re not canceling the LCG.  In fact, we have two cycles and three big boxes already planned and ready to go.”

It would be a comfort to folks like me who don’t post on the forums much, but read everything that goes up.  It would be encouraging to people like myself who work really hard to make our local group happen each week.  It would be a wind in the sails of those who are doing the hard work of recruiting and even selling a product that they don’t get commissions on.

Listen, as someone who does a lot of public communication, I know it’s easy for things like this to slip through the cracks.  So we’ll be happy to forgive and forget!  Just write us a 200-word memo–won’t take you any time.  Put it on a forum, Twitter, or something!  Just give us a little nod, a Rogue one expansion (did that get in here?), and send us on our way.  That’s all we want.  Ok, rant over.

I think you should try Destiny.  Buy a couple starter boxes, sit down, and give it a whirl.  Even if you’re not a hard-core card gamer, you’ll have fun.  And the dice won’t be that bad to you.  Trust me.  You may even find yourself buying a few booster packs the next time you stop by the FLGS.  It’s not going to break the bank, if you’re a casual gamer.

If you’re competitive, I really do think there’s enough depth here to keep you interested.  As new cycles come out, there will be more synergies and exciting gameplay to experience.  If the LCG is any example, FFG will keep churning out some really great stuff for players in the years to come.

In the end, I don’t think there’s any reason for us LCG players to fret.  Maybe I’m wrong, but the galaxy seems big enough for these two games to coexist.