They call it a dungeon grind.

It’s a grind.  It’s a slog.  An encounter-by-encounter, gear-grinding endeavor that makes even the most experienced player and GM tremble. 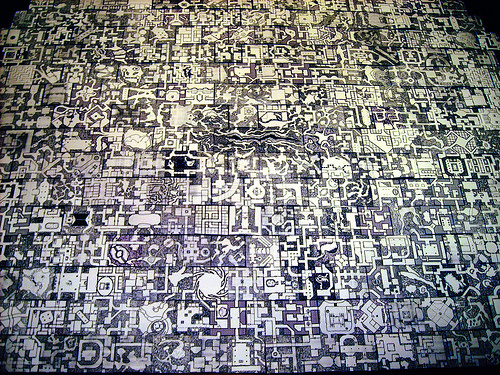 My second session of D&D as a GM was a dungeon freaking grind.  Why?  Well, I had a really big playmat, lots of new miniatures, and I wanted to use it all!  But I learned very quickly that fight after fight after trap after fight can not only kill character, but also bore players.  Is it possible to have a complex dungeon without boring the spit out of our players?  I think you can.  And I’m learning how to do it from Gary Gygax himself:

As you likely know, my home RPG group is 1-2 sessions from the end of T1: The Village of Hommlet.  And, boy, it’s a grind.  They search a room, find a trap.  Search a room, get attacked, often to the point of unconsciousness or death.  It’s not just the frequency of encounters, it’s the frequency of lethal encounters that are making it challenging.  But with all that, my players don’t seem to be getting bored or frustrated with it.  Why?

Good dungeon crawls use terrain to their advantage

All roads lead to Rome.  But that doesn’t mean there’s only one way to get there.  And Gygax applies that principle in spades.

SPOILER ALERT: there’s a big bad evil guy [BBEG] at the end of The Village of Hommlet.  And there are about a hundred different ways to get to him.  A stairwell here, a long narrow hallway there, a secret door, and (oh!) a terrifying descent.  But in the end, you’re going to the same place.

Such a variety of terrain, however, leaves your party feeling very uncomfortable.  My players keep asking, “How big is this dungeon?”  There’s a sense that there’s a lot going on that (a) we can’t fully explore and (b) we’re not sure we want to explore.  It’s not a railroad.  It’s a choose-your-own-adventure with built in tension and the same eventual end goal.

Beyond that, each of Gygax’s rooms has a personality and mind of its own.  This module (at times) suffers for over-description.  But when it strikes a chord, it strikes it well.  Each room filled with the unexplained and degraded relics of yesteryear paint a bleak and unnerving picture for the players wandering through it.  Of course, it helps too that the least scary room (a kitchen that smells like rotten food) has a beasty in it that almost sucked out the innards of our Fighter.

By varying the feel and tone of each room, it keeps the players engaged and on the end of their seats.

One of the criticisms of AD&D 1e (that I’ve heard anyway) is the painfully unforgiving save rules.  You know, “save vs. death,” “save vs. paralysis,” and the like.  And let’s be honest: there’s no coming back from those rolls.  You roll and the result stares you in the face.  “Sorry, your character has perished.”

Last week, we faced our first “save vs. paralysis” roll.  Holy mackerel!  OK, so get this:

If the monster successfully attacks, the player must save vs. paralysis.  If they fail, they are paralyzed for 3d4 rounds!

That, my friends, is a game-changer.  By the end of the battle, two PCs and an NPC were paralyzed.  The two remaining PCs were dragging them out of the room and hurriedly barricading themselves inside.  The table talk got a little grim at one point.  Statements like, “we’re doomed” and “what’s your next character going to be?” were floating around.

In the end with some creative teamwork and split-second judgment calls, the players made it through with everyone alive.  What’s my point?  We’re 90% of the way through this module and suddenly we’re seeing something new.  The last battle was a horde of undead.  That battle was a hack-and-slash, when-does-it-stop, we’re-all-going-to-die maelstrom!  Before that, it was “us five” versus “that one big dude.”  You see my point?  Variety in battle and enemy style is just as important as terrain variety.  It keeps the players wondering what could possibly be next, again upping the ante in terms of challenge and excitement.

But how can you apply these principles in your next dungeon crawl?  Ask no further:

How you can build a good dungeon crawl like Gygax

First, you need to commit to a dungeon crawl.  It can be a fearful commitment.  You may be many sessions in the dank, dark dungeon depths.  But you’ve got to make the choice.  Get your BBEG holed up in there, get your map drawn out, and start the crawl.

Second, for each session take brief notes for three notable rooms.  Make them colorful!  Make them complicated.  Include lots of obstacles for cover in battles and impediments in fleeing.  Put in traps…or things that look like traps.  Make some rooms too ordinary to trust.  And then let them be ordinary.  Listen: it doesn’t have to be overcomplicated.  Sketch it out, make it fun, and move on.  Choose which rooms they’ll be on your dungeon and roll with it.

Third, for each session be prepared for two combat encounters that are very different.  You’ll have to gauge the speed of your players.  But I’m learning that in AD&D 1e, my players can handle 1-2 dungeon fights each session.  After that, they’ve got to go back to town for medical treatment.  Gygax is ruthless…and I’m following his rules as closely as I humanly can.  So if you’re designing your own dungeon crawl, look for what you think will be a reasonable number.  Two will probably be good.

Fourth, don’t forget the spaces in-between.  These are your hallways, your secret passageways, your mineshafts, and your tunnels.  My players end up spending as much space in these as they are in rooms.  Why?  Because they’re nervous and preparing for what comes next.  So jot down a note or two about these.  And, honestly, reward curious players with secret doors, treasure, and what-not.  Make it worth it to look for stuff in every nook and cranny.

I believe these principles will help you craft a dungeon crawl like Gary Gygax.  A crawl, not a grind!  You want your players to be engaged, excited, even nervous as they move through your dungeon…not wondering if it’s ever going to be over.

What other tips would you add?  How do you make your dungeon crawls exciting?  Sound off in the comments below:

13 thoughts on “Breathe life into that boring dungeon crawl!”