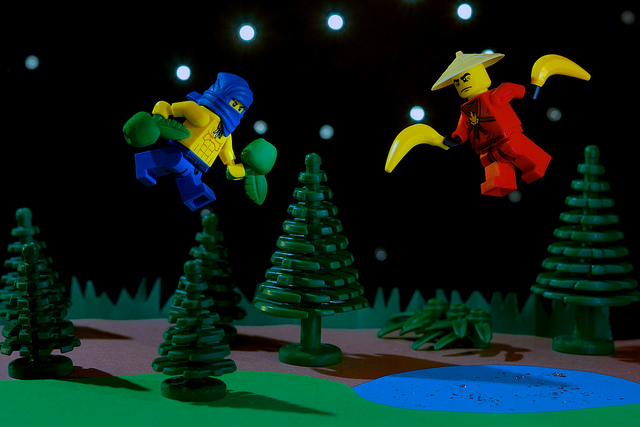 My players dispatched of the bandits with no problem.  Then they knocked out the horse.  All in a matter of two rounds.  And then?  The treasure.  I rolled on the treasure table (MM, 105) and they made bank.  To the tune of one player went from 0xp to Level 3 amounts of XP.  What the heck happened?

If there had been 20-200 bandits, it would have been hard to kill any of them, let alone get that large chunk of cash.  Gygax wasn’t no idiot.  He rewarded players for risk.  The bigger the risk, the bigger the treasure.  By monkeying around with the numbers, I jacked up the system.  It may be imbalanced, but it’s not broken.

So if you’re wanting to be an AD&D Dungeon Master, here are my three tips for embracing the imbalance in encounter design:

The MM and DMG are two different kinds of resources for DMs.

The Monster Manual is a book of biology and ecology.  You’ll learn that wild horses usually move in packs.  You’ll learn how bandits organize themselves and how they are led.  If you want your players to have a natural experience of stumbling on a bandit camp, by all means use the stats and treasure in the Monster Manual.  It will be awesome.

The Dungeon Masters Guide gives sound advice for encounters.  This is where “Appendix C: Random Monster Encounters” really shines.  It sorts out what kinds of threats should be thrown at certain level parties.  It tells you how many enemies are a reasonable amount.  It gives levels of treasure appropriate to the risk.  And, on top of all that, it’s in random tables, so that you can be quick about it.

If you want to embrace the imbalance as a DM, you’ve got to know the purpose of these two resources.  Each fits a very different, but appropriate purpose.

Choose the type of encounter you want to create

Are you training your players?  Use the DMG.

Are you trying to create a sense of danger?  Use the MM.

Are you giving them a taste of the world they’re living in?  Use the MM.

Are you pursuing a quest that, while important, is not worth dying over?  Use the DMG.

Of course, all of this can be solved by running modules.  But as I’m learning very quickly, not all of them have encounters just laid out for you.  You’ve got to do some encounter design yourself.  If you want to embrace the imbalance as a DM, you’ve got to choose the type of encounter you want to create–and then use the appropriate resource.

Award treasure appropriate to the level of risk

Do I regret giving my players all that gold and the XP that comes with it?  Nah, especially since you don’t level up automatically (more on that soon).  But if I’d known what I know now, I would have done it differently.

Buy your copy of the Monster Manual and the Dungeon Masters Guide.  Become well acquainted with them.  And get to DMing!

6 thoughts on “AD&D: Embrace the Imbalance”