And we’re off!  Session 1 of Chasing the Dragon is on the books.  My home group began playing T1 – The Village of Hommlet.  As I’ve said about the module before, this introductory setting is just that: a setting.  It’s a very good setting, but a setting nonetheless.

I’ve been spoiled by more recent adventure books, where the whole story is laid out for the GM step-by-step.  Even more sandboxy ones, like D&D 4e’s The Slaying Stone or FFG’s Star Wars: The Jewel of Yavin, still had a general plotline to which the GM was supposed to draw the players back.

Not so with Hommlet!  Instead, Mr. Gygax has put remarkably painstaking detail into his setting.  Vivid characters–beautiful buildings–interest-provoking details–all of these with no plot hooks.  Now you could imagine that the details are themselves the plot hooks, but the dots are left for the DM to connect. 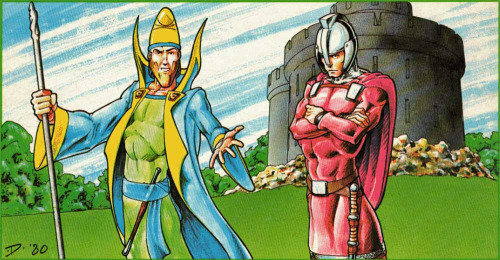 My players were curious what kind of workout these guys did on a daily basis.

Now that I’m one session in, I’m fine with it.  The players are enjoying the intricacies of the adventure thus far.  They like the characters, the village, and the process.  But here are the two things I wished I’d known as a first-time AD&D DM:

You need to go back to the basics of questing.

You remember the early parts of console RPGs, where you had to do lame little quests?  You had to do the same in MMORPGs, but I’ve been told never to mention MMORPGs and D&D in the same blog.  You might end up mentioning 4th edition.  Anyway, you remember those lame little quests like, “Carry the bundle of sticks to the village on the opposite side of the map for 25 Rupees!” or “Find my kitten!  It’s lost in the village fair!”

There’s a reason for these quests in those games…and in AD&D.  First, my players need to learn the mechanics of the game.  And if they don’t have some basic questing, it’s going to be frustrating trying to learn it when it really counts.

Second, XP in AD&D is based on two things: killing and making money.  The more you kill and the more money you net, the more XP you make.  If you don’t throw your players a bone and give them some way to (a) kill and (b) make money, they’re really going to have a hard time progressing later in the adventure.

I didn’t realize all this.  So we enjoyed the sandbox.  For four hours, we had a great time, roleplaying and occasionally rolling dice.  I guess I’ve been brainwashed by more recent narrative-focused games, but we had no combat!  Not a bit.  And in the end (rules-as-written), the players get very little XP.  I found the incongruent with the players’ efforts, so I gave XP anyway.  As Gygax tells us, the rules are meant to be broken.

But in hindsight, here’s what I learned.  I’ve got to get back to the basics of questing.  With all these interested characters and backstories, there are loads of opportunities for the players to embark on quests that get them nearer other characters and settings in the module.  I’m going to take a whack at it next week and see if I can’t get through a quest or two to give them more oomph in the XP department.

The preparation curve for a DM is pretty steep

While “The Village of Hommlet” really is an interesting, detailed module, it is not for those who struggle with memory.  The details are so buried in the text (much like the DMs Guide), it’s nigh unto impossible to find it quickly.  Which means, you’ve got to either make it up, or have another tool.

I made a really, really long spreadsheet with all the characters and buildings in Hommlet, so that I’d have a quick resource.  I’m going to share that with you once my players have completed the adventure.

Regardless, this module is not plug-and-play.  You have to read it completely and then go back and skim it again, taking notes.  And it is not the best reading.  Imagine reading Lord of the Rings without the narrative.  Just the details.  Let’s just say it took me a while.  After the first reading, the skim was a breeze and was actually more fun.  But it’s tough on a first go-round.

I’ll be curious to see how the other modules compare, when it comes to reading and preparation.  I’m hoping that they made strides toward more recent modules that read more like a story and less like a reference work.

We’ll be continuing with session two next week, so I’m sure I’ll have more to report on.  Of those of you who have DMed “The Village of Hommlet” what tips might you have?  Please sound off in the comments or on my Twitter feed.

5 thoughts on “Seeking a Quest in Hommlet”